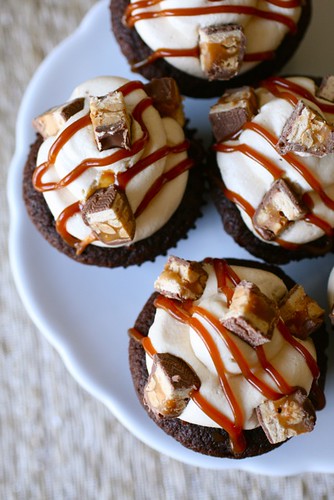 My brain seems to have a constant, never-ending stream of thoughts relating to food.  I’m sure many fellow food lovers can relate.  I think about what I’m making for dinner, what I had for dessert last night, and often what sorts of new recipes I want to try.  One day a month or so ago, inexplicably and out of nowhere, the idea of Snickers cupcakes popped into my head.  A glorious idea, I tell you, and the urge to have one was so strong, I was just dying to get home and make them.  I didn’t even have a recipe in mind but was determined to find one.  Literally the very next day I saw them pop up on one food blog, and then another.  None were the exact version I had in mind, so I combined components of various recipes to achieve the result I was hoping for.

The final version consists of a chocolate cupcake, filled with a caramel-Snickers mixture, topped with caramel buttercream and garnished with additional Snickers and caramel sauce.  Rich as can be, and full of Snickers flavor, these are a decadent treat to say the least.

In a medium saucepan, combine the butter and the sugar over medium heat.  Heat, stirring occasionally to combine, until the butter is melted.  Remove the mixture from the heat and transfer to the bowl of an electric mixer fitted with a paddle attachment.  Beat on medium-low speed, 4-5 minutes, until the mixture is cooled.  Mix in the eggs and egg yolk, one at a time, scraping down the sides of the bowl as needed and beating well after each addition.  Mix in the vanilla and then the cocoa mixture and beat until incorporated.  With the mixer on low speed add in the dry ingredients in two batches, alternating with the sour cream, beating just until combined.

Divide the batter between the prepared cupcake liners, filling them about ¾ of the way full.  Bake 18-20 minutes or until a toothpick inserted in the center comes out clean, rotating the pans halfway through baking.  Allow the cupcakes to cool in the pan 5-10 minutes, then transfer to a wire rack to cool completely.

To make the caramel sauce, melt the butter in a heavy-bottomed saucepan over medium heat.  Add the sugar and cook, stirring occasionally, until the sugar begins to foam a bit.  It will look and smell like it’s on the verge of burning.  Remove from the heat and add the heavy cream.  Stir until the sauce is smooth (you may need to return it to the heat to smooth it out), then mix in the vanilla and salt.  Let cool.  (This can be stored in the refrigerator for up to 2 weeks.)

To fill the cupcakes, cut a cone out of the center of each cupcake with a paring knife. 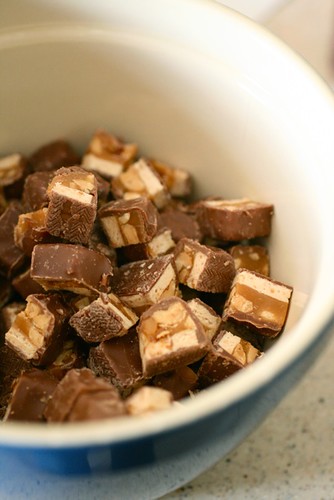 To make the filling, combine the chopped Snickers bars in a bowl with 1/3-½ cup of the caramel sauce, and mix to coat. 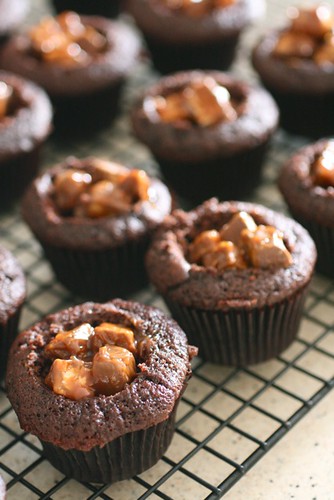 Drop a spoonful of the filling mixture into each cupcake.

To make the frosting, add the butter to the bowl of an electric mixer.  Beat on medium-high speed 1 minute until smooth.  Blend in the confectioners’ sugar until smooth, 1-2 minutes.  Mix in the vanilla, caramel sauce and salt until incorporated.  (Note: the caramel sauce should be just warm enough that it is workable, but not warm enough to melt the butter in the frosting.)  Add the heavy cream and whip on high speed until light and fluffy, about 3-4 minutes. 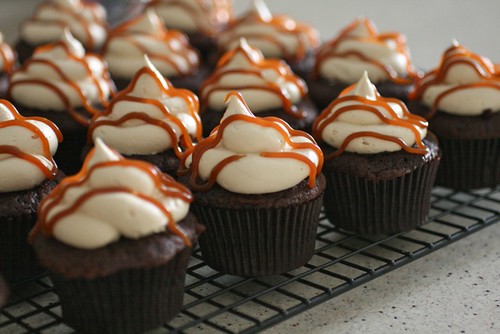 Transfer the frosting to a pastry bag fitted with a decorative tip.  Drizzle the frosted cupcakes with additional caramel sauce and garnish with chopped Snickers bars. 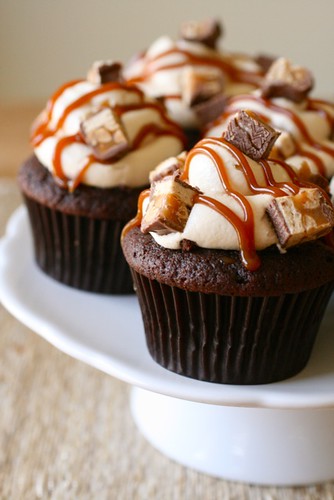 Note: I used an Ateco 809 tip for these cupcakes.