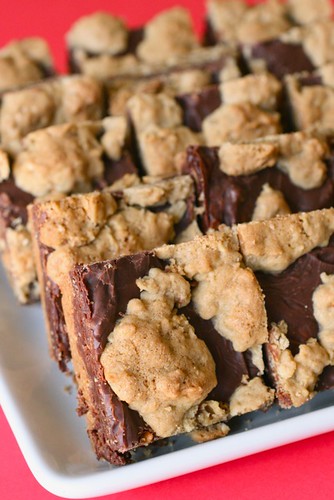 Yep, it’s another recipe with oatmeal :)  It took me no time at all to know I was going to make these cookie bars after seeing them made recently by the members of Tuesdays With Dorie.  Dorie’s cookbook is one of my favorites because her recipes never disappoint.  Another thing I love about her is all the wonderful ways she uses honey roasted peanuts.  They are one of our favorite ingredients in desserts, and Dorie does them proud.  They were phenomenal in the chocolate peanut butter torte and brilliant in the caramel peanut-topped brownie cake.  And now, here they are again in a wonderful oatmeal bar cookie.

The name is fitting because these definitely reminded me of a candy bar.  Because the chunks of the top cookie layer are spread out, I felt like some bites were more chocolate-oatmeal cookie, and some tasted just like Snickers.  I cut them into 24 bars this time around, but because they are so thick I will cut them smaller next time.