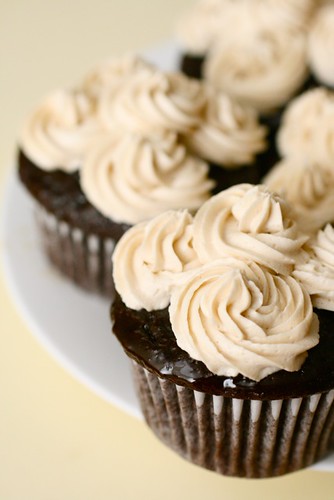 I’ve really been on a roll with the booze-flavored cupcakes, huh?  Guinness & Bailey’s cupcakes, chocolate whiskey cupcakes, margarita cupcakes – what can I say, they are everyone’s favorites!  My list of cupcake flavors to try had gotten a bit out of control, with recipes in cookbooks, magazines, on tons of food blogs, and in my own imagination.  I finally took the time to consolidate them all and come up with a cupcake menu for the coworkers to use when making their birthday selections.  These chocolate Kahlua cupcakes were the first flavor chosen from the list.

I opted to use a one-bowl chocolate cupcake recipe for the cupcake base with some espresso powder mixed in to punch up the coffee flavor.  Brushing the cupcakes with Kahlua after baking helps keep them moist and infuses the flavor of the liqueur.  For the frosting I whipped up this Kahlua buttercream, basically a classic boozey buttercream with a bit of whipping cream mixed in to help lighten the texture.  I loved these, as did the coworkers because really, you just can’t go wrong with the combo of coffee, chocolate and alcohol.  Any coffee-flavored liqueur can be substituted for the Kahlua, but that just happens to be what we have on hand.  And because I know someone will ask, the tip I used to frost the cupcakes is a small (unlabeled) star tip.

For brushing the cupcakes:
Kahlua liqueur