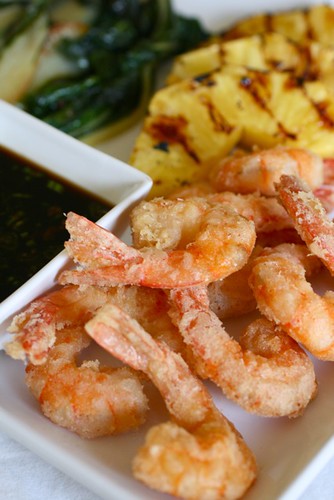 In the last year or so I have really taken a liking to sushi.  I hadn’t tried it much before that, but the more I try it, the more I like it, love it, can’t get enough of it.  Each time I try different types of rolls, but the one I can’t live without is shrimp tempura roll.  I am dying to try making it at home but first things first, I had to figure out how to make the shrimp tempura itself.  This recipe is from an issue of Cook’s Illustrated from last summer and now I am totally regretting not trying it sooner.

We were both crazy in love with this dinner.  The batter coating the shrimp is light, crisp and delicious.  According to the people at Cook’s Illustrated, the vodka is critical to the texture of the coating so it should not be omitted or replaced with a substitute.  On the whole this was actually a pretty quick dish to throw together and I would say the most time consuming part is waiting for the oil to come to temperature.  I served this with slices of grilled pineapple and stir-fried bok choy.  A ginger-soy dipping sauce recipe is included with the shrimp, but I must say that I personally wasn’t a big fan of it.  It didn’t even taste bad per se, it was just really overpowering to the flavor of the shrimp.  This was a fantastic meal all around, and one we will surely be enjoying again and again!