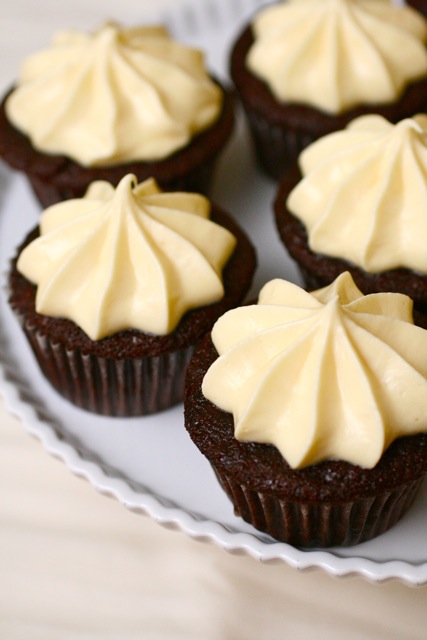 I’ve been having a lot of fun playing cupcake fairy for my coworkers on their birthdays.  It’s always interesting to see what flavors people will choose, and I especially love it when I’m challenged to create a new variety I haven’t tried before.  My good friend and coworker Adam has been looking forward to his birthday cupcakes for months.  He also changed his mind several times about what he wanted.  Initially he was leaning toward something uber chocolatey, but after trying the Irish car bomb cupcakes he was loving the idea of a boozey cupcake too.  When I saw a recipe for Jack Daniels buttercream, I knew I had found just the thing.  I ended up making a chocolate cake, brushing it with a whiskey simple syrup, and topping with this fabulous buttercream.  The end result was just what I was hoping for – a moist chocolate cupcake with a nice kick of whiskey.

Everyone seemed to really enjoy these, although it is obvious that people have very different thresholds for the strength of whiskey.  Some thought they tasted very strong, while others (Adam) felt they could have been even stronger.  However, I doubled the amount of whiskey in the frosting and am sure that if I had added even one teaspoon more, it would have dissolved.  Personally, I thought the balance was just right for my tastebuds – strong enough that it deserved the word “whiskey” in the title, but not so strong I was looking for a chaser.  I will say that the frosting was a bit challenging to make.  Though I boiled my sugar mixture to the correct temperature by my candy thermometer, it almost completely hardened when I transferred it to the liquid measuring cup.  I thought all was lost, but decided to try to salvage it anyway.  I added the mixture to the frosting anyway, and it seemed to correct itself because the frosting was perfectly smooth and there were no hard bits of sugar anywhere.  Next time I may just avoid the hassle altogether and use the same recipe as the Bailey’s buttercream, just subbing whiskey instead.  Or maybe mix some Jack into my favorite basic Swiss meringue buttercream.  I think there are lots of options to make these, and they’ll all be delicious because apparently whiskey and chocolate is a winning combination :)

For the whiskey simple syrup: