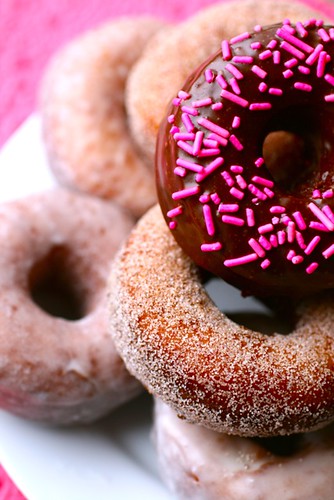 Doughnuts have been on my list of baking goals for quite a long time, but for some reason I was a little intimidated by them.  I’m not sure why – it’s basically just a fried brioche dough.  I think more than anything I was overwhelmed and that with so many recipes to choose from, I would choose the wrong one and sink a bunch of time into a failure.  Finally I decided to just buckle down and do it after several requests from friends and readers for a doughnut recipe.  I didn’t even bother trying to compare the bajillion recipes I had saved, I just went with my always-reliable source, Baking Illustrated.

It probably goes without saying, but homemade doughnuts are awesome.  I knew in advance that they would be hard to resist so I contacted several friends before I even made them, to be sure they didn’t stick around our house for too long.  I actually think the doughnut holes are even more dangerous because you can just keep popping them into your mouth – irresistible, I tell you!  I couldn’t decide which topping option sounded best, so I decided to make all three included in the book.  I made a half batch of each of the toppings, so if you want to make a full batch of only one flavor, double the quantities indicated below.  Even after tasting them all, I’m not sure I can choose a favorite – it’s probably a tie between the cinnamon sugar and chocolate glazed versions.  The vanilla glaze was much thicker than what I prefer, so after dipping one doughnut I decided to thin it out more to my liking.  Now that I’ve tried them once, I am looking forward to playing around with more flavors and variations.  Though it certainly won’t be something I make often, it’s nice to be able to add it to my repertoire.

Yield: about 15-16 doughnuts, plus doughnut holes

Directions:
To make the dough, in a medium bowl combine 3 cups of the flour, the yeast, sugar and salt .  Stir together with a fork and set aside.

In the bowl of a stand mixer fitted with the dough hook, combine the milk and eggs.  Add the flour mixture and mix on low speed for 3-4 minutes or until a ball of dough forms.  With the mixer on low speed, add the softened butter a piece at a time, mixing for about 15 seconds between each addition.  Continue mixing for about 3 minutes longer, adding the remaining flour 1 tablespoon at a time if necessary, until the dough forms a ball. 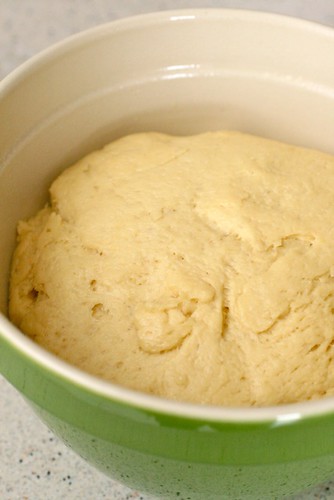 Transfer the dough to a lightly oiled bowl, turning once to coat.  Cover with plastic wrap and let rise at room temperature until nearly doubled in size, 2-2½ hours. 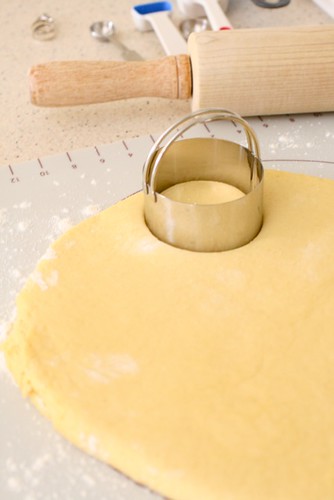 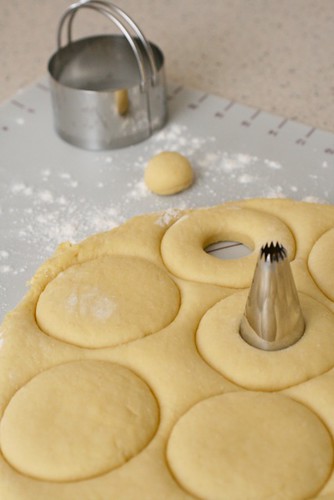 Transfer the dough to a lightly floured surface and roll it to a thickness of ½ inch.  Cut the dough into rounds using a 2½-3 inch biscuit or cookie cutter.  Use a smaller circle cutter to cut the hole out of the middle of each, creating the doughnut shape.  Reroll and cut the dough scraps as necessary to make use of all the dough. 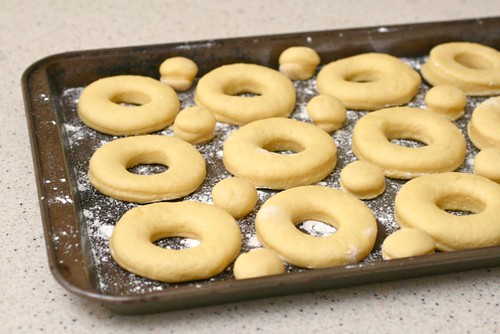 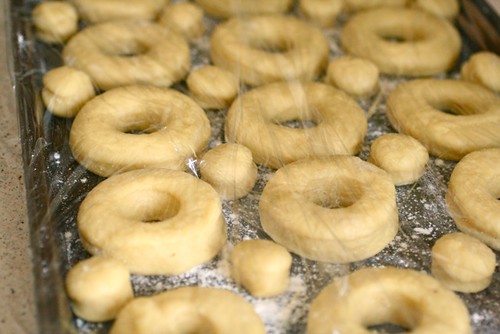 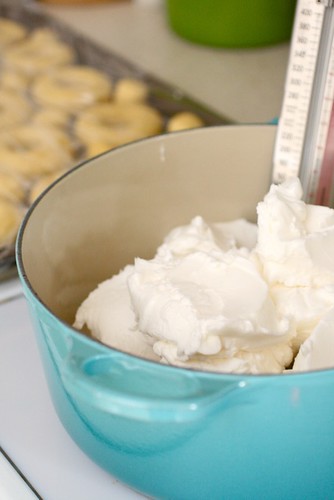 (I really hate shortening, so I was nearly gagging at this point.  Just power through.)

Meanwhile, fit a candy thermometer to the side of a large Dutch oven.  Add the shortening to the pot and gradually heat it over medium-high heat until it reaches a temperature of 375˚ F.  Place the rings and holes carefully into the hot fat 4 or 5 at a time. 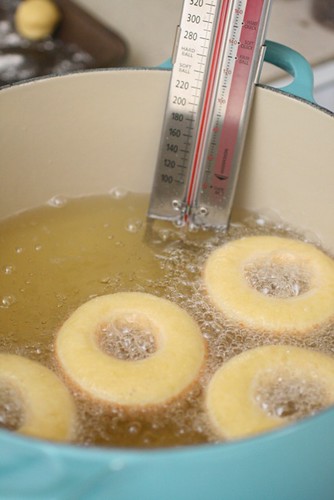 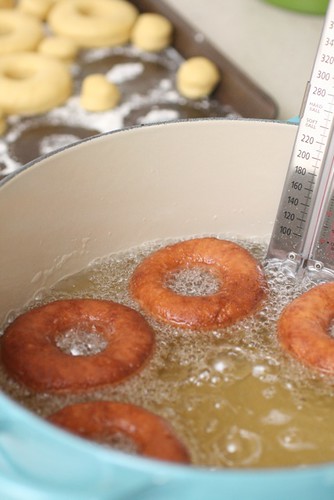 Fry until golden brown, about 30-45 seconds per side (less for doughnut holes).  Remove from the hot oil with a skimmer and transfer to a paper towel-lined cooling rack. 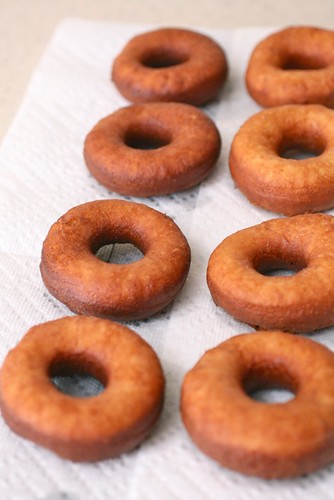 (Keep a close eye on how brown they are getting.  I thought the frying time indicated in the original recipe was a bit too long, so I shortened it for subsequent batches.  They were more golden, and more what I was hoping for.) 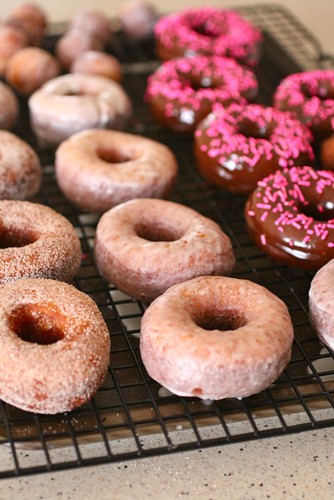 To make the cinnamon-sugar doughnuts, whisk together the sugar and cinnamon in a shallow bowl or plate.  Roll the warm doughnuts in the mixture to coat, then return to the wire cooling rack.

To make the vanilla glaze, whisk together the confectioners’ sugar, half-and-half, and vanilla extract.  Add more half-and-half 1 teaspoon at a time as needed to achieve your desired consistency.  Dip both sides of each doughnut in the glaze, gently shaking off any excess.  Return to the wire cooling rack with a baking sheet set underneath to catch drips.

To make the chocolate glaze, place the chopped chocolate in a medium bowl.  Heat the half-and-half until simmering, then pour over the chocolate.  Whisk together until the chocolate is melted.  Whisk in the confectioners’ sugar until smooth.  Dip one side of each doughnut in the glaze, shaking off the excess.  Return to the wire cooling rack and top with sprinkles if desired.  Let the glaze set before serving. 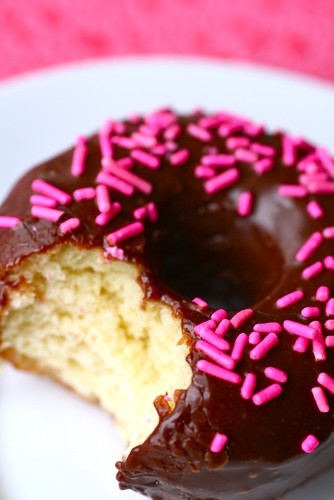