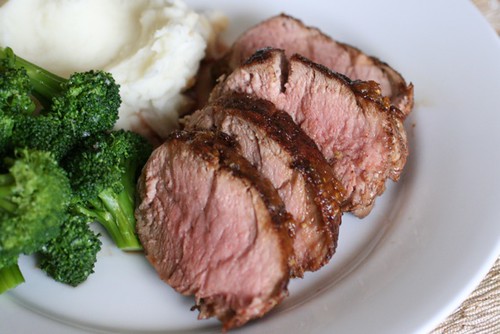 Most of the time when I save recipes, I do it because I know without a doubt that we will love the result.  (This is why about 98% of the recipes I have saved are desserts.)  Sometimes, though, I save things more because I think, “Hmmm…interesting…that might be good.”  This recipe was definitely a case of the latter.  In fact, I put it on our menu back in November or December but the day came when I was planning to make it and it just did not sound good to me at all.  So back into the freezer went the pork, and it has been there all this time waiting for me to change my mind.  I finally decided that I needed to either use the pork or get rid of it, so I put the recipe back on the menu and decided I would make it no matter what.  Turns out, we were blown away by this meal.

The combination of spices may seem a bit odd, but the end result is a little bit spicy but also sweet, and incredibly flavorful.  Ben even deemed this his new favorite kind of pork tenderloin.  I was very surprised by how quickly it came together.  Most pork tenderloin recipes I make require marinating of some length, but this is just a simple spice rub made from pantry ingredients, and a glaze to go on top.  I halved the amount of glaze because the original amount just seemed like overkill.  I’m glad I did because this was just the right amount.  Just be sure to spread the glaze out very evenly over the top of the tenderloins.  I had a bite or two that seemed overly sweet because of too much glaze.  All in all, this is a fantastic preparation of pork that is quick enough for a weeknight and nice enough to serve to company.

Directions:
Preheat the oven to 350˚ F.  Combine the salt, pepper, cumin, chili powder and cinnamon in a small bowl.  Stir together with a fork to blend.  Pat the mixture over the pork tenderloins.

Heat the olive oil in an ovenproof 12-inch skillet over medium-high heat.  Place the tenderloins in the skillet and brown on all sides, turning occasionally, about 4 minutes total.  Remove from the heat, leaving the pork in the skillet.

Stir together the brown sugar, garlic and Tabasco in a small bowl until blended.  Spread the mixture evenly over the tops of the tenderloins.

Place the skillet in the preheated oven and roast about 20 minutes, until an instant-read themometer inserted in the center of each tenderloin registers 140˚ F.  Loosely tent the skillet with foil and let stand 10 minutes before slicing and serving.

Source: adapted from Pennies on a Platter, originally from The Gourmet Cookbook

adapted from Pennies on a Platter, originally from The Gourmet Cookbook