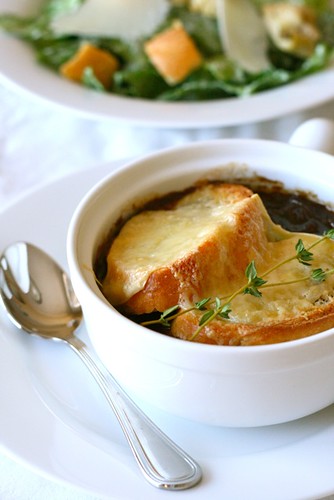 So here’s the deal – the longer I blog, the more I look back at my old posts and cringe.  The pictures were bad, and so was the commentary.  But, a lot of the recipes I blogged about in the beginning are still great recipes and they deserve your attention.  This is why I have slowly started updating old posts for recipes I think are worthy of a second go-round.  French onion soup is a perfect example.  It’s a wonderfully comforting classic dish and I think everyone should have a good recipe for it, but my old post may have sent people running in the other direction. 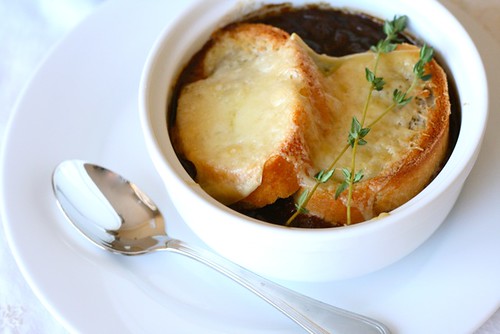 I’ve played around with the recipe a bit since my original post, to combine aspects of two recipes into my own version of this soup.  This rendition uses the traditional caramelized onions as well as leeks for an extra dimension of flavor.  The liquid base is a mixture of chicken and beef broths enhanced with red wine.  And of course, one of the very best things about French onion soup is the baguette slices with melted Gruyere on top.  My favorite thing about this soup is how thick it is, rather than primarily broth with the occasional bite of caramelized onion.  Paired with a nice salad, this makes a lovely lunch or dinner.  It also makes great leftovers!

adapted from Williams Sonoma and The New Best Recipe