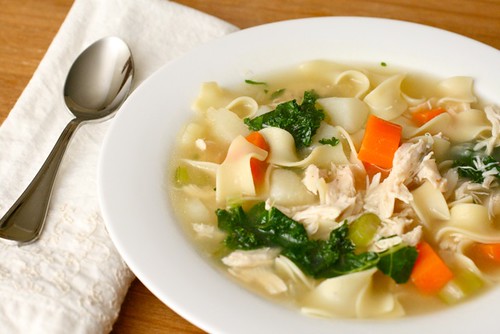 Chicken noodle soup is such a classic.  I’ve been wanting to make it for a very long time, but to be honest I was a little intimidated.  This may seem strange considering that I have a slight obsession with soup, but it’s just that this is such a classic dish, I was worried whatever I made would fall short of greatness.  It seemed like a soup that could so easily be incredibly bland, and I just don’t do bland.  Bland foods were a fear of mine from childhood, and I’m still not over it.  I also didn’t want to spend hours and hours making chicken stock the old fashioned way.  I know, I know, homemade chicken stock is supposed to be great and everyone swears by it, but it honestly grosses me out a little bit (the whole chicken situation) and I was looking for a quicker option.

Cook’s Illustrated came to the rescue big time.  They created this fantastic version of chicken noodle soup that is packed full of flavor.  This recipe calls for a combination of chicken broth and homemade chicken stock.  The stock is made with a somewhat untraditional method, using ground chicken.  I was thrilled with the final result, and was amazed by just how flavorful the soup turned out.  The wonderful broth base combined with chicken, lots of veggies and egg noodles made for an amazing final product.  I used kale instead of Swiss chard simply due to availability, and I loved the lemony bite that the kale provided.  My only dislike was the chunks of potato added to the mix.  As we all know, potatoes need salt.  Because of the way these potatoes are added to the soup and cooked, they ended up with essentially no seasoning.  I didn’t really think they contributed anything in the way of flavor and I will omit them next time.  One final bit of praise is for the ratio of chicken, veggies and noodles to broth – it was perfect.  I don’t like soups that are primarily broth with an occasional chunk of the good stuff.  This was full of the chicken, veggies, etc. and the broth helped to accentuate the flavors.