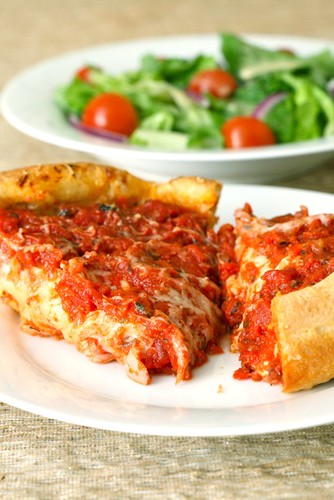 My first time trying Chicago-style pizza was actually not all that long ago.  I was in Chicago (duh) less than two years ago to take a portion of my medical boards.  I made it through the eight-hour day of testing and really needed some relaxation, but since we had three-month old Andrew with us at the time, a nice dinner out in the city just wasn’t in the cards.  We walked to pick up a pizza from Pizzeria Uno, went back to our hotel room, and pretty much devoured it.  It was a wonderful way to calm down after a very stressful day. 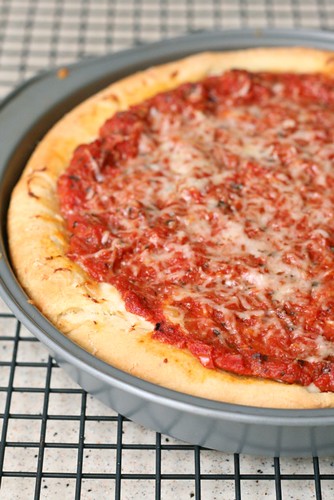 Honestly, I wasn’t sure what to expect of the pizza other than that it would be deep-dish, so I was surprised to see the sauce on top of the cheese.  Now I know that’s part of what makes it Chicago-style.  But it was good – and so was this homemade version.  The thick, tall crust serves as sort of a bowl for all the yummy toppings and sauce.  I tried a different deep dish recipe a while back that was just “eh”, but this version is definitely a winner.  The crust was fabulous – soft, flaky and buttery, but sturdy enough to stand up to all the cheese and sauce on top of it.  The original recipe yields two 9-inch pizzas but I made just one for the three of us.  Next time I might make both and try freezing one, since it would be a nice thing to have around when for a last minute meal.