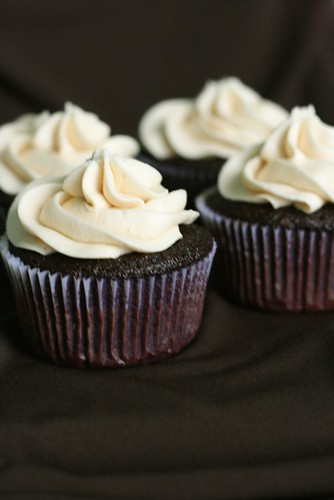 My friend and coworker Ryan had a birthday recently and asked if I had ever heard of Guinness cake with Bailey’s frosting.  Car bomb cupcakes – of course!  Not only had I heard of them, I’d been dying for an opportunity to try them.  For those unfamiliar, an Irish car bomb is a drink consisting of a shot of Bailey’s and whiskey and a glass of Guinness.  Sounds innocent enough, until you find out that the shot is dropped into the Guinness and the whole thing must be chugged before a foamy mess is all over the place.  I have never tried this concoction, though I have seen Ben and his friends do this more times than I care to mention.   Though I can’t vouch for the drink, I can definitely vouch for these cupcakes.

Wow, these are fantastic cupcakes.  They consist of a Guinness chocolate cake base, are filled with a Bailey’s-spiked ganache, and topped with Bailey’s buttercream frosting.  It sounds like a winning combination and it really, really is.  These were hugely popular with the coworkers and received many thumbs up all throughout the day.  They are fun to make, pretty, and they smell phenomenal.  The beer flavor isn’t very prominent, but rather adds a nice depth to the chocolate cake.  The Bailey’s ganache filling – I almost skipped it, but thank goodness I didn’t.  It really put these over the top to amazingness.  The Bailey’s buttercream was delicious as well and the flavor of the Bailey’s really came through.  I did have to add quite a bit more Bailey’s than the original recipe indicates (darn!) but it turned out fine in the end.  These are sure to be a hit wherever you serve them!