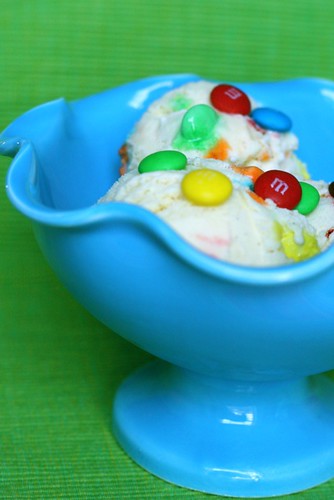 M&M’s have been my favorite candy for as long as I can remember.  I remember getting them as a reward for doing good things as a kid – maybe that’s where my love started.  Regardless, my affection for this candy has not faded.  I find M&Ms incredibly addicting.  So it comes as no surprise that I’ve been dying to incorporate them into an ice cream.  I actually tried one version from my Ben & Jerry’s ice cream book last year, and though it tasted good, it just wasn’t quite the perfection I was hoping for.  The texture was off and the thing that bothered me the most was that the colored candy shells melted a bit when the candy was mixed in, causing this ugly smeared color effect.  That old slogan, “They melt in your mouth, not in your hand,” is just plain wrong!  Not only do they melt in my hand, they melt in ice cream – which is cold!  This just wouldn’t do.

I brainstormed until I came up with a version I knew would be successful, and it most definitely was!  I decided to try David Lebovitz’s French-style vanilla ice cream as the base because I wanted something thick and creamy that stayed frozen well.  As to the problem of the ugly color smearing, I simply froze the M&Ms for about an hour before I mixed them into the ice cream – voila!  It worked wonders.  The colored candy shells  stayed where they were supposed to and the ice cream tasted fantastic.  Despite many other tempting treats in the house, I ate this every night until every last bite was  gone.

Adapted from The Perfect Scoop by David Lebovitz