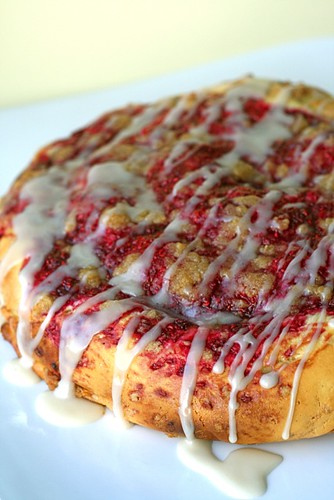 As I mentioned in my post about the raspberry crumb bars, we recently picked a lot of raspberries at a nearby orchard.  I had decided before we even left the orchard that I wanted to use some of them for a raspberry coffee cake.  Ever since the last time I made a yeasted coffee cake, I have been wanting to try a berry version and also wanted to try a new method for shaping.  This was just as fun to make as last time and not only that, this version is unbelievably delicious.  I could barely resist eating the whole thing when it was straight out of the oven.  It made a phenomenal breakfast treat for the rest of the week.

The original recipe yields two cakes but I have halved the quantities in the version below for just one cake.  However, this time around I actually did make two cakes so that I could take one over to a friend.  In doing so, I learned a valuable lesson – if you bake two cakes, bake each on its own baking sheet.  My two cakes seemed to fit fine before baking, even after rising, but while baking they really puffed up and kind of grew into each other.  It really wasn’t that big of a deal but they would have been better off on individual sheets.  I took pictures throughout the shaping process so that it is easier to understand.  I can’t wait to make this again!  Yummmm.

Directions:
To make the dough, sprinkle the yeast over the warm water in the bowl of a standing mixer fitted with the paddle attachment; stir to dissolve.  Add the sugar, eggs, milk and vanilla.  Mix at the lowest speed until well combined.  Add about 1½ cups of the flour and the salt, mixing on low speed until the flour is incorporated, about 1 minute.  Increase the speed to medium-low and add the butter pieces one at a time, beating until incorporated, about 20 seconds after each addition.  Replace the paddle with the dough hook and add the remaining ½ cup plus 2 tablespoons flour; knead at medium-low speed until soft and smooth, about 5 minutes longer.  Increase the speed to medium and knead until the dough tightens up slightly, about 2 minutes longer.

The dough will be too soft to pick up with your hands, so scrape it into a straight-sided lightly oiled plastic container using a dough scraper (I just used a spatula).  Cover the container tightly with plastic wrap and let rise at warm room temperature until doubled in size, 3-4 hours.  Press down the dough, replace the plastic and refrigerate until thoroughly chilled, at least 4 or up to 24 hours.  Alternatively for a quick chill, spread the dough onto a lightly oiled baking sheet, about 1-inch thick, and refrigerate until thoroughly chilled, about 2 hours.

Meanwhile, to make the berry filling, combine the berries, sugar, lemon juice, salt, cinnamon, cornstarch and water in a medium saucepan.  Bring to a boil over medium heat, stirring occasionally.  Continue boiling, stirring constantly, until the mixture is thick and shiny, 1½ to 2 minutes.  Scrape the mixture into a small bowl, cover and chill thoroughly before using.

To make the cream cheese filling, beat the cream cheese, sugar, flour and salt in the bowl of a mixer at high speed until smooth, 2-4 minutes.  Add the lemon zest, egg and vanilla extract.  Reduce the speed to medium and continue beating, scraping down the sides of the bowl at least once, until incorporated, about 1 minute.  Scrape the mixture into a small bowl and chill thoroughly before using.

To make the streusel topping, mix the brown and granulated sugars, flour, cinnamon and salt in a small bowl.  Add the butter pieces and toss to coat.  Pinch the butter chunks and dry mixture together between your fingertips until the mixture is crumbly.  Chill thoroughly before using. 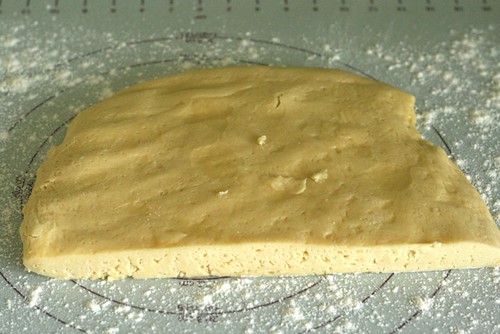 When you are ready to shape the coffee cakes, remove the chilled dough from the refrigerator and turn it out onto a lightly floured surface. 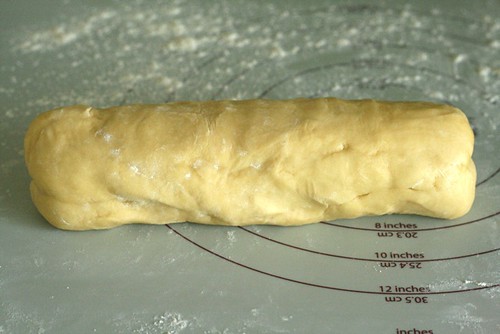 Shape the dough into a log about 8 inches long and about 2 inches in diameter.  (For me, there was way too much dough to fit into a 8 x 2-inch log, so I just approximated.) 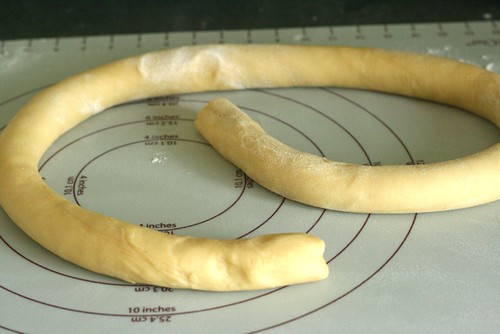 Roll the log evenly into a 40-inch rope about 1 inch in diameter. 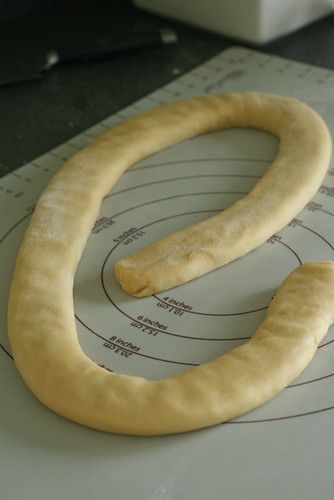 Use your fingers to flatten the log slightly into a 1½-inch wide strip. 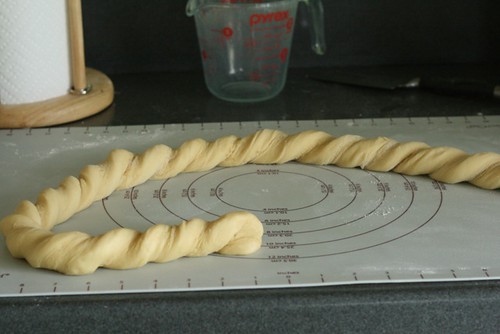 Use both hands to twist the strip of dough into a coil.  (I found the length of the rope to make it a bit difficult to coil the whole thing neatly.  The easiest method was to start from the middle, coil one half of the rope, and then coil the other half from the opposite end, keeping the direction of the coils consistent.) 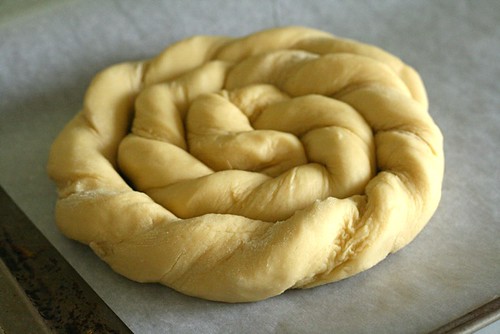 Loosely coil the rope in a spiral pattern, leaving a ¼-inch space between coils.  Tuck the end under and pinch to secure.  Place the coil on a baking sheet lined with parchment paper. 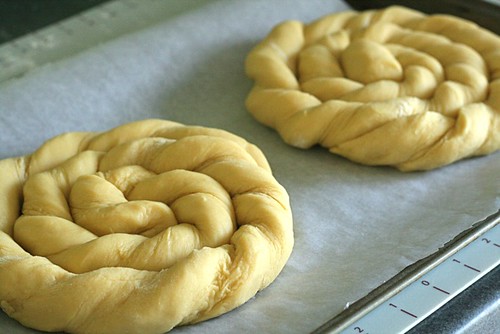 Remember, if you make two cakes, place each on its own baking sheet – trust me!  Cover the shaped cake with plastic wrap and let proof at room temperature until slightly puffed, 1½ to 2 hours. 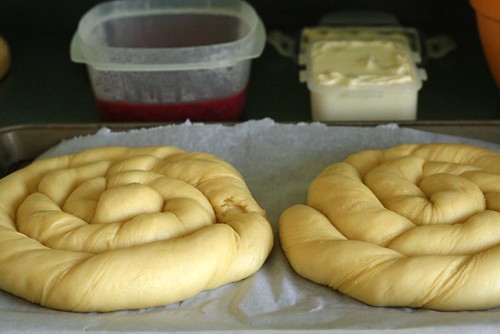 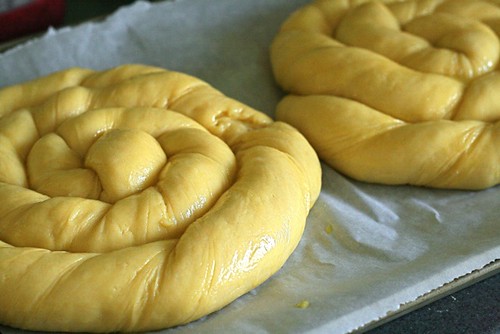 Brush the cake with egg wash. 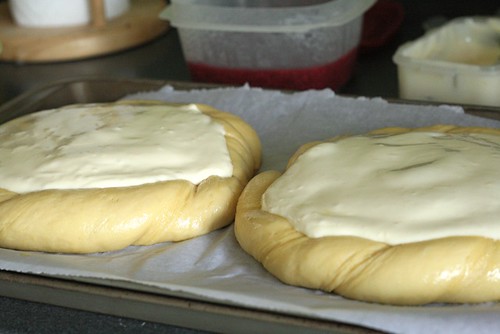 Spoon the cheese filling over the center of the top of the cake, leaving a border clear around the edge. 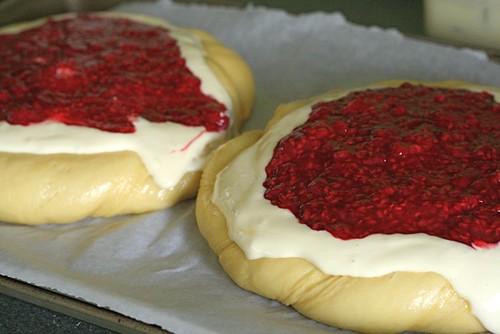 Layer the raspberry filling over the top of the cheese filling.  (Some of the filling may leak over the edges, but it won’t hurt anything.) 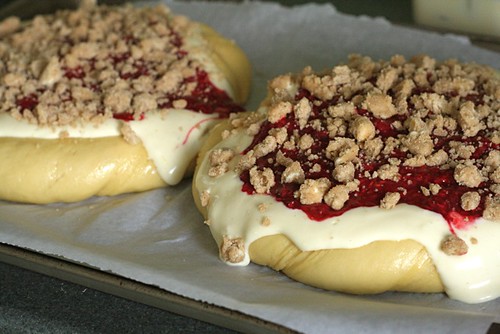 Sprinkle the streusel topping over the top of the cake.  Slide the baking sheet onto a second baking sheet to prevent the bottom crust from over-browning.  Bake in an oven heated to 350° F until deep golden brown and an instant-read thermometer inserted in the center of the cake reads 190° F, about 25-30 minutes.  Transfer to a wire rack and cool for at least 20 minutes.

To prepare the glaze, whisk together the confectioners’ sugar, milk and vanilla extract in a bowl.  Drizzle over the top of the finished cake and let set before serving. 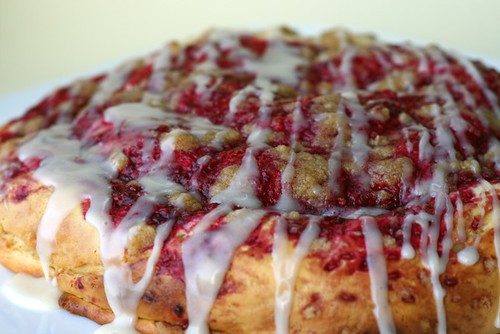