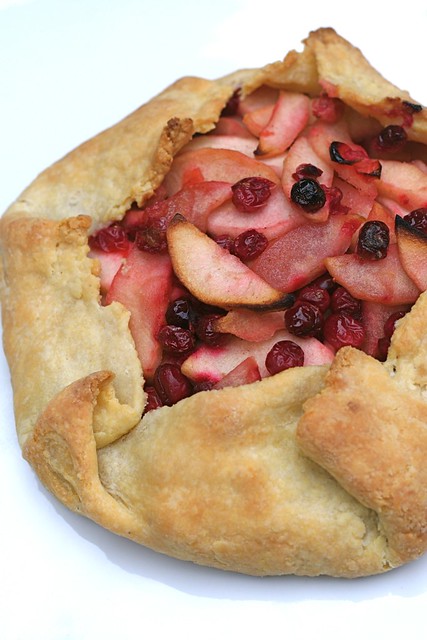 Well, I’m just going all fall on you this week, aren’t I?  First the pumpkin blondies, now this.  Let me just say that with my very serious apple orchard addiction, you have a lot more apple recipes coming your way.  This was my first time ever trying a galette.  To be honest, the first time I ever heard of one (basically a free-form pie), I was kind of turned off.  Why would you want such a non-uniform, rustic appearance when you could have a pretty, symmetrical traditional pie?  I never saw the appeal and never intended to try one until I ran across this recipe and for some reason, I needed to make it.  I’m guessing the apple-cranberry combo had something to do with it.

One great reason to make a galette is if you need to make a dessert with little equipment available to you.  In this case, I’m referring to my dad’s kitchen.  You don’t even need a pie pan – just a baking sheet.  I did use a stand mixer to make the crust, but it is easily done by hand as well.  We had a big group of friends over for a cookout and I decided to try this since it seemed simple and sounded delicious.  It was quite well received with all of our guests, and I now understand the appeal of this dessert.   I think its rustic quality actually makes it attractive – plus, I think the crust looks pretty cool folded up in pleats.  This crust recipe is unlike any I have tried before in that it contains cornmeal and sour cream (you could also use yogurt).  I was concerned about how the texture would be affected but ultimately this came out great and I thought the crust tasted fantastic.  The original recipe as printed below yields two galettes, but I think one would be enough in most circumstances.  I made two since we had a crowd.