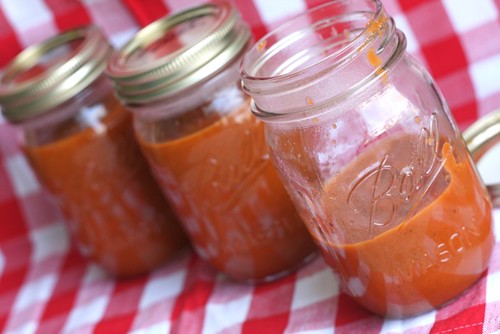 Alright people, this sauce was a revelation for me for two reasons.  One – I formerly believed that I hated barbeque sauce. Occasionally I eat BBQ chicken at my dad’s house because he makes it a lot, but if it were up to me I would probably never choose to eat it.  Turns out, it’s delicious!  Two – I never knew that making your own barbeque sauce was so darn simple!  The only reason that I even attempted this recipe was as a gift for my dad.  I wasn’t planning to keep any of it, but I did feel obligated to try it if I was going to blog about it or give it as a gift.  Well, let’s just say none of this batch ever made it to Dad’s (though our babysitter did receive one jar). 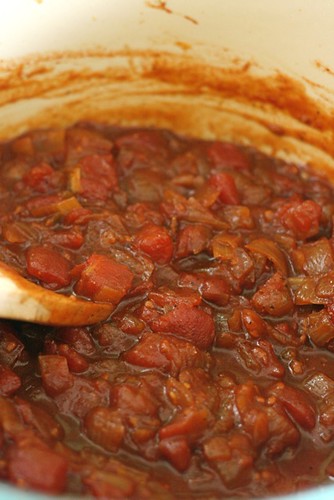 The method is very simple – sauté some onions and garlic, mix in the spices, sugar, molasses and tomatoes and let simmer to reduce and thicken for a couple of hours at least.  A bit of water is added to the final product and it is blended to achieve a smooth consistency.  This could not be easier!  Another great thing about this is how easy it is to adjust the recipe to suit your own tastes.  I added a few tablespoons of honey to mine and thought it was an excellent addition.  Like things spicier?  Add some cayenne pepper and paprika.  Make it your own! 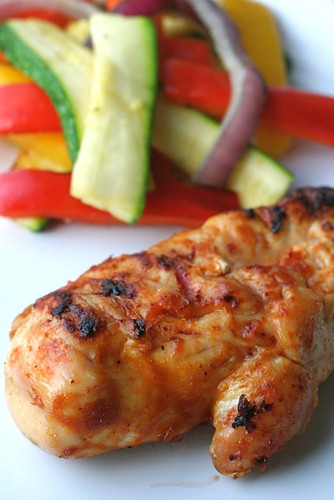 I only made a half batch (about two and a half jars) since I wasn’t sure if I was going to like this, but I have written the full recipe below because I will definitely make full batches from now on.  I did not use proper canning procedures this time around, so I consider it good in the fridge for about two weeks.  There are, however, lots of good online resources for properly canning foods and sauces, and I may try that next time around so that I can keep lots of this stuff on hand.  I may also just try freezing it since I now realize just how convenient it can be to have some tasty barbeque sauce around the house.  I got home from work one night later than expected, but grilling up a few chicken breasts dressed with the sauce and garden veggies on the side made dinner a breeze.  We even used extra sauce on the side for dipping because we enjoyed it so much.