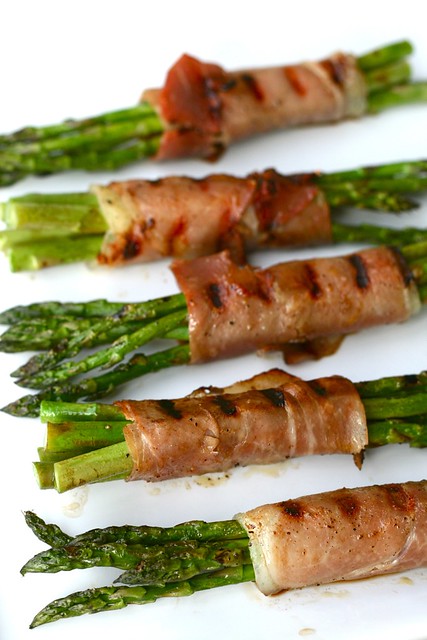 Talk about an easy appetizer.  These little bundles of yum take almost no time to make.  Waiting for the grill to heat up is the most time-consuming part!  If you are looking for a way to fill out your grilling menu with something slightly unique, these are perfect.  Proscuitto has been my most recent victory in finding a less-than-mainstream ingredient at the grocery store.  I have searched for so long, and finally thought to look in a case near the deli – sure enough, there it was.  Hooray!

If you have had proscuitto before, you know it is salty! Because of this, I think it’s best to use multiple spears of asparagus rather than wrapping single spears individually to help cut some of the salt.  And I think it goes without saying, but you definitely do not need any added salt when seasoning these.  Just some black pepper and a drizzle of balsamic vinegar will do. Depending on the thickness of the asparagus spears available to you, you may want to use more or less in a bundle.  I could only find skinny asparagus so I used about 5-6 spears in each, but for regular thick spears, I would probably go with 3 per bundle.  I have seen this appetizer many times before, so I used no real source when preparing this dish but just sort of winged it on my own!