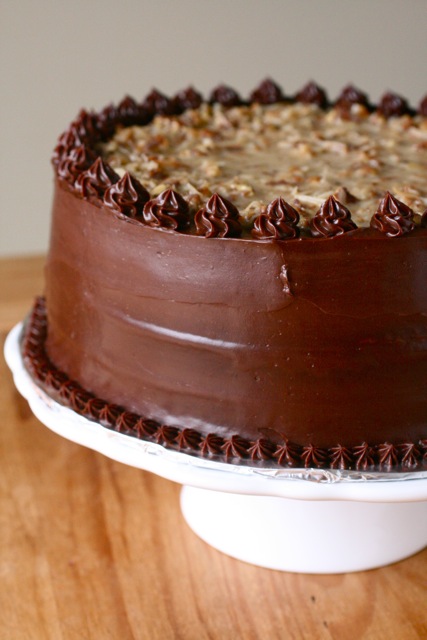 German chocolate cake has been my dad’s favorite cake for as long as I can remember.  So, it’s probably pretty surprising that I have never attempted making one from scratch before now.  Growing up my fabulous nanny who was more like a second mom always brought us a birthday cake in our favorite flavor – always a sheet cake, and always from a box with canned frosting.  She still makes me my standard strawberry cake with vanilla icing and darn it, it’s delicious!  This year though, she has had some other things going on in her life requiring her attention so Dad did not get his standard German chocolate cake.  I saw this as the perfect opportunity to finally try my hand at one – I’ve been itching to give it a shot for so long!

I’ve had this recipe from David Lebovitz bookmarked for quite some time.  It was of course, not surprising to me that this turned out nothing short of amazing, like nearly every other recipe of his that I have tried.  Truly, this cake was to die for.  One of my brothers was working while the rest of the family sampled the cake, but the next day I received a text message from him stating, “Last night, hands down, best cake I have ever eaten in my entire life.”  Considering that German chocolate is his favorite, and that he has tasted nearly every cake I have made, I think that says it all.  The coconut-pecan filling was absolutely divine, the cake tasted wonderful and the rum syrup really helped keep the layers moist.

As far as the recipe goes, I had a few minor issues.  Despite the fact that I drenched my cake layers, there was a TON of rum syrup left over so unless you have some other use for it, I would reduce the amount by at least half and maybe even more (I have reduced by half in the version below).  The only other problem was that this is frosted with a ganache-like icing which, when freshly made, cannot possibly neatly frost a cake and would really require pouring.  I chilled mine in the fridge and then the freezer for quite a while but I finally ran out of time before we needed to leave, so I just did the best I could with the consistency I had.  I definitely recommend chilling this ganache very thoroughly before attempting to frost or decorate with it.  This cake may seem like a big project, but I made the whole thing easily in one morning with no trouble (other than waiting for the frosting to cool).  Enjoy!

*I was unable to find unsweetened coconut, so I used sweetened and the filling tasted great