Chicken with Forty Cloves of Garlic 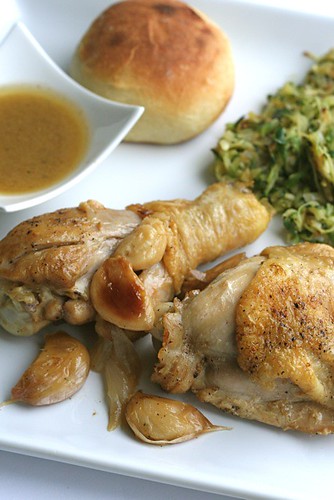 One thing I always look forward to on a weekend free of any obligations is the opportunity to make a more involved meal for dinner one night.  I have seen many versions of this recipe many times before, but have put it off and put it off some more because I never felt like taking the time to make it.  Recently I decided that I needed to just get over it and give this a try because everyone I know who has made it has given it rave reviews.  I am so happy I have finally tried this because it is really an incredible meal.  The chicken is incredibly moist and has fantastic flavor.  I actually thought it was really fun to make and even though it took some time, it was well worth it.  I almost skipped making the sauce at the end because I was busy with a side dish, but ended up making it and I have to say, the sauce is a MUST.  I mean, the chicken tastes fabulous on its own, but the sauce takes it to a whole new level.  The leftovers were wonderful as well.

I did need to make a few minor alterations to the recipe.  I used my Dutch oven for browning and baking the chicken pieces because it really didn’t look like they would fit in a 12-inch skillet.  I had to brown them in two batches because they could not all fit at once.  Then I just placed them all on top of each other to bake.  They did take slightly longer to bake than the recipe called for, but once again, this is the importance of using an instant-read thermometer.  There is no question as to whether the meat is properly cooked.  I will definitely be making this again and again.  I think it will be especially wonderful when the weather starts to cool off.

adapted from The Way the Cookie Crumbles, originally from Cook’s Illustrated