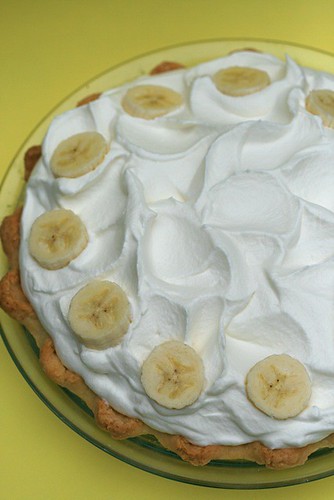 Banana cream pie is something that I have never had before now, but I have always thought it sounded amazing.  Don’t you?  How could you not be immediately hooked by such a title?  To be perfectly honest though, I never even knew what it consisted of.  I assumed it was some sort of banana pudding-y base with mounds of cream on top.  I am sure that some people or restaurants pass off such a creation as banana cream pie, but now I stand corrected. 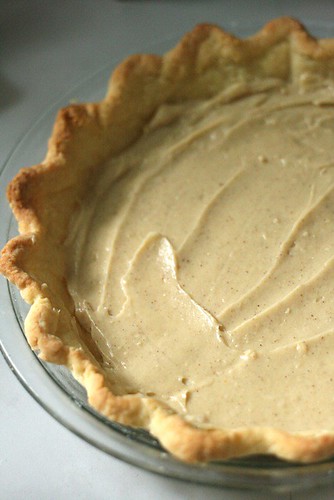 You start with a classic pie crust, and layer pastry cream with sliced bananas.  This particular version from Dorie Greenspan uses a brown sugar pastry cream flavored with cinnamon and nutmeg – way to go, Dorie!  The topping does consist of a gigantic mound of whipped cream – yummmmmm.  The original recipe calls for mixing a couple tablespoons of sour cream into the topping.  I tasted it before and after, and I wasn’t crazy about the addition of the sour cream.  I don’t think it added much but did just cut the sweetness of the topping.  Personally I think the pastry cream and banana slices would pair nicely with the sweeter whipped cream, so next time I will omit the sour cream altogether. 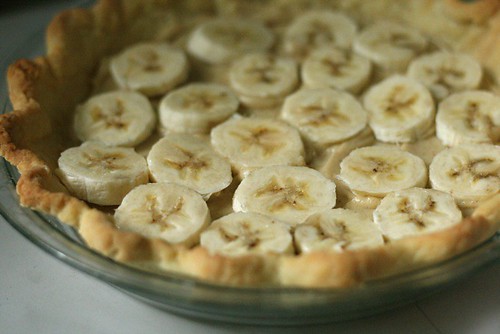 You definitely need to be a fan of bananas to enjoy this, because banana most definitely plays a starring role.  As it should be of course, given the name of the dessert.  I expected this to be a mess once cut into but it actually sliced beautifully.  Unfortunately the light was gone by the time this was sliced, but it was also devoured so rapidly I’m not sure I could have taken a picture if I had tried.  I’m submitting this recipe to Flavor of the Month hosted by Bake at 350, since the “flavor” for July is pie.  Enjoy! 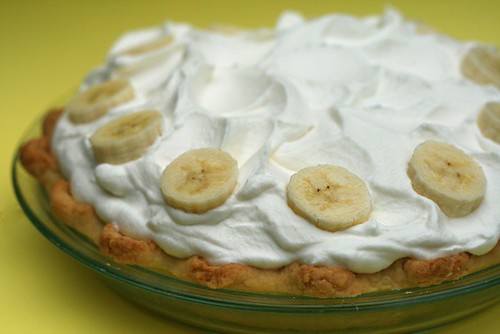 3 ripe but firm bananas, plus extra for garnish (if desired)

adapted from Baking: From My Home to Yours by Dorie Greenspan (pie crust from Williams Sonoma)