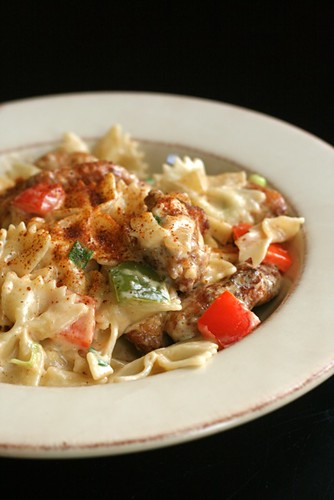 My motivation behind trying this dish runs back to a few months ago.  We had just purchased a new car (yay!) and were leaving the dealership.  Since it was already pretty late for dinner and we were nearby, we decided to head to Cheesecake Factory as a mini-celebration.  We sat down and looked at the menu, I took maybe one sip of water, and then Andrew had a mega-meltdown and we ended up having to leave the restaurant with no dinner.  (Hey, I can’t blame him – sitting through all the lengthy signing ceremonies at the dealership made me cranky too.)  The meal I had planned on ordering was Louisiana chicken pasta – it sounded fabulous!  I was so bummed I didn’t get to try it that night.

Just a couple of weeks later, Tara posted this knockoff recipe on her blog.  I took that as a sign that I definitely needed to taste this dish!  It did take me a while to get around to this one, but I’m glad I made it.  Now, if you are a healthy-food only person, navigate away from this page quickly.  This is pasta with pieces of fried chicken and a cream sauce – so yeah, not even kinda healthy.  However, I really think this dish could be lightened significantly, and I actually think I would prefer it that way.  This was delicious, but the time it took to bread and fry all the chicken pieces was just not worth it to me.

I’ll most definitely make this again, but with several adaptations.  Next time, I will only use one chicken breast.  I used two this time and ended up with a HUGE amount of chicken pieces.  If I had used it all, it would have been like chicken with a few pieces of pasta so I saved half of it to make salads with the next night for dinner.  And not only will I use less chicken, I will skip the frying entirely.  Instead I think I will just season the chicken with Cajun seasoning and sauté it to save time and calories.  I will increase the veggies a bit, as I would have enjoyed more of those. Also, I think the cream sauce could be lightened by replacing more of the heavy cream with half and half or whole milk.  I have reflected all of these future changes below, but if you are interested in the real version, check out the link below.

Directions:
To cook the chicken, heat a small amount of butter or olive oil in a large skillet over medium-high heat.  Season the chicken pieces with salt and pepper, and a generous sprinkle of Cajun seasoning.   Add to the skillet and cook until lightly browned and cooked through.  Transfer to a plate and set aside.

Bring a pot of salted water to boil.  Cook the pasta according to package directions.   Drain the cooked pasta and set aside.

Meanwhile, return the skillet to medium heat and heat the butter and olive oil until the butter has melted.   Add the bell peppers and onion to the pan.  Mix in the salt, pepper, Cajun seasoning and cayenne pepper.  Cook until the vegetables are tender, about 6-8 minutes.  Add the half-and-half and heavy cream to the pan and bring to a simmer.  In a small bowl, whisk together the cornstarch and water, and add to the skillet once the cream mixture has started to bubble.  Allow to cook until thickened, about 5 minutes.

When the sauce has thickened, add the cooked pasta and chicken pieces to the pan.  Stir well to combine and cook at medium-low heat just until the chicken is warmed through.  Adjust the amount of Cajun seasoning if necessary to suit your tastes.  Stir in the scallions.  Serve immediately and top with additional Cajun seasoning, if desired.

Source: adapted from Smells Like Home, inspired by The Cheesecake Factory