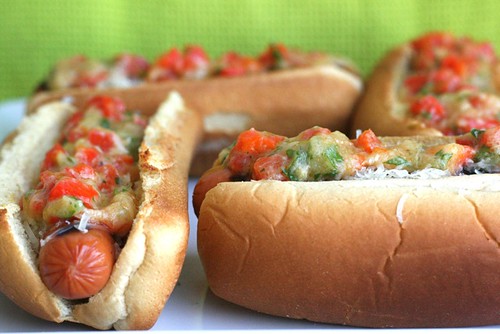 I rarely eat hot dogs, but maybe a month or so ago, totally out of the blue, I had a major craving for a hot dog.  I bought turkey hot dogs which I usually really like, and they were good but they just did not satisfy my craving.  I gave in and bought the real deal, ate one for lunch and it was delicious!  Then, maybe a week later my issue of Bon Appetit arrived in the mail with an article titled, “Around the World in 80 Dogs”.  This just kept the craving rolling because as I read through the article, I saw so many variations that sounded really great.  Then my only problem was which to try first.  I ended up trying this, their Spanish variation on hot dogs.  The grilled dogs are topped with shredded manchengo cheese and then a relish made of roasted garlic, roasted red pepper and parsley.  Yum!  Just as you might expect from the description, these were very tasty and a unique spin on a plain old hot dog.  I am looking forward to trying several of the other varieties described in the article.