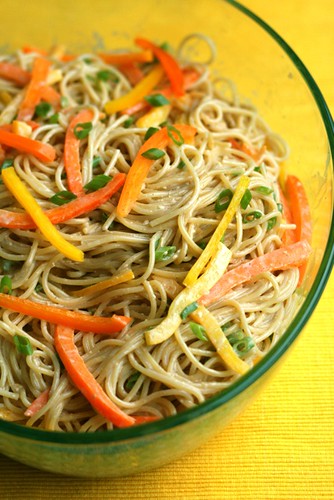 I recently mentioned how I have rediscovered some of my Barefoot Contessa cookbooks.  While I was baking the pecan bars, I flipped past this page in the book and instantly wondered how I had never really noticed this recipe before.  I sounded phenomenal, and relatively simple at that.  I quickly found an occasion to try it out when we invited my mother-in-law over for lunch one afternoon.  I thought it would make for a nice light lunch, and boy, did it ever!  I thought this would be good but it far surpassed my expectations.  The sauce was full of peanut-y flavor and pleasantly spicy.  These noodles were incredibly addictive, and we polished off the whole pound of pasta over a few short days.

The dressing is incredibly quick to whip up in the food processor, and can be made several days in advance.  Though the ingredient list may look long, I already had almost everything in my pantry.  I prepped the dressing and chopped all the veggies in the morning so that when we were ready to eat, all I had to do was cook the pasta, toss and serve.  I think snow peas would also be an excellent addition to this dish, and some grilled chicken pieces could make this a complete meal.  The only thing to note is that the dressing recipe makes quite a lot.  Ina recommends adding 3/4 of it and then adding more as needed.  I added just under half of it, and it seemed like plenty.  I did pass a small dish of it at the table so we could adjust according to our own tastes.  Even though it makes a lot of dressing, I will probably continue to make the whole batch so we can use the leftover later on.  And, for anyone who buys tahini to make hummus and is interested in finding another use for it, here you go!

Directions:
Place the garlic and ginger in the bowl of a food processor fitted with the steel blade.  Process until finely minced.  Scrape down the sides of the bowl.  Add in the remaining dressing ingredients and puree until smooth.  Transfer to an airtight container and store in the refrigerator while preparing the pasta.

Cook the spaghetti until al dente according to the package directions.  Drain the pasta in a colander, transfer to a serving bowl, and while still warm toss with about half of the dressing.  Add the bell peppers and scallions; toss.  Add remaining dressing to taste and serve warm or at room temperature.