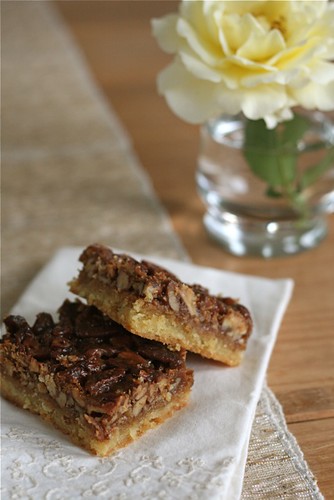 Don’t you love when you rediscover a cookbook you’ve had for some time, but haven’t paid much attention to lately?  That is what has happened to me lately with The Barefoot Contessa Cookbook.  During my original stint with the book, I skimmed right over this recipe because that was back during the time when I was convinced I hated all nuts.  Obviously, a dessert devoted to nuts was not high on my list of things to try.  However, last Thanksgiving I realized that I actually really like pecan pie, so this time when I turned to this page in the book, I was immediately craving these pecan bars. 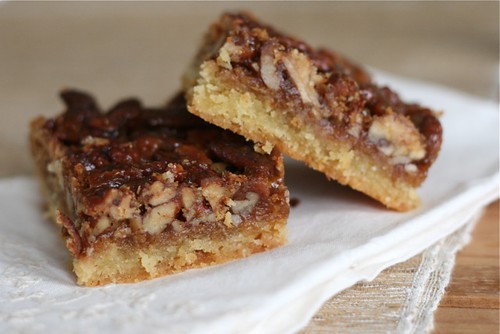 Despite the fact that I halved the recipe, these still use just over a pound of butter (!) but, they are worth it.  Just make sure you have some willing recipients to help you eat them so that you can have a taste without all the guilt.  I took a suggestion from Ina and dipped one side of the bar in chocolate for most of the batch.  I tried them both with and without the chocolate, and it was no surprise to me that the chocolate was an excellent idea!  These are basically like pecan pie in bar form.  The nuts have a nice deep flavor from being baked, and the buttery short crust is just right.  I did change my method slightly to make the assembly and the removal from the pan easier.  After baking the crust initially, I slid strips of parchment paper around the edges to help contain the pecan filling and prevent it from soaking under the crust or sticking to the baking pan.  It seemed to work very well, so I have noted this.

Directions:
Preheat the oven to 350 degrees F.  For the crust, beat the butter and granulated sugar in the bowl of an electric mixer fitted with the paddle attachment until light, about 3 minutes.  Add the eggs and the vanilla and mix well.  Sift together the flour, baking powder, and salt.  Mix the dry ingredients into the batter with the mixer on low speed until just combined.  Press the dough evenly into an ungreased 9×13-inch baking pan.  The dough will be very sticky, so you can use a piece of plastic wrap around your fingers to help prevent the dough from sticking to you.  Bake for 15 minutes, until the crust is set but not browned.  Allow to cool.

Once the crust has cooled a bit, it will have shrunk away from the sides of the pan.  Cut long, thin strips of parchment paper and stick them between the crust and the pan.  This will help prevent the filling from oozing underneath the crust, and from sticking to the pan.

For the topping, combine the butter, honey, brown sugar and citrus zests in a saucepan.  Cook over low heat until the butter is melted, using a wooden spoon to stir.  Raise the heat and boil for 3 minutes.  Remove from the heat.  Stir in the heavy cream and chopped pecans.  Pour over the crust.

Bake for 25-30 minutes, until the filling is set.  Remove from the oven and allow to cool.  Wrap in plastic wrap and refrigerate until cold.  Cut into bars and serve.  Once cooled, dip half of each bar in melted chocolate and allow to set on wax paper, if desired.