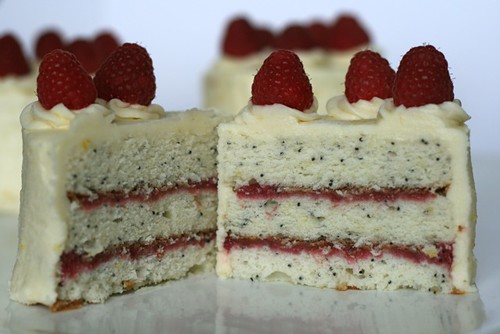 I can’t let birthdays of friends or loved ones pass by without baking them some sort of treat to mark the occasion.  My best friend Amanda’s birthday was all the way back at the beginning of April, but due to both of our very busy schedules, we were not able to get together until the end of May.  But, better late than never I guess!  She and her husband came over for dinner and I made these mini cakes in (belated) honor of her birthday!

If you read my post about the lemon yogurt cake, you know that I am not a fan of loaf cakes because they are such no-frill desserts.  I consider these little cuties my lots-of-frills answer to the lemon yogurt cake :)  These were really, really delicious, and so pretty!  The cake itself was my favorite part.  I love almost anything lemon poppy seed, but this cake has an incredible texture with a light, soft and tender crumb.  The filling was very tasty as well, although I think I would add a thicker layer of it next time to make the flavor more pronounced.  (It is difficult to make too thick of a layer though, without the cake layers sliding off of each other.)  Every one else seemed to like this frosting pretty well, but I think I would have preferred a lemon cream cheese frosting instead.  This was tasty but maybe just a bit too sweet for me.  Next time I’ll go the cream cheese route. 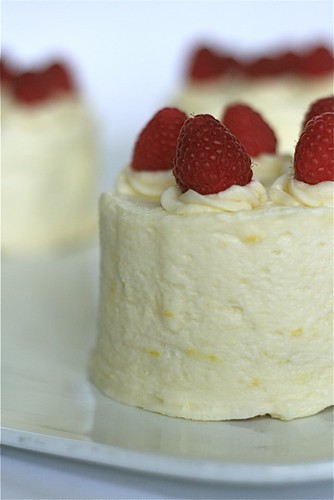 Of course you don’t have to make these into mini cakes (but they’re so fun!)  You can bake the cake into two 9-inch rounds, squares, or whatever you would like.  I baked the batter in a 9×13″ pan and used a round cookie cutter to cut out six cake rounds.  I then sliced those horizontally in half to equal 12 cake rounds.  This obviously resulted in a lot of leftover cake scraps which, while perfect for snacking on, would also be great made into a light summery trifle with fresh whipped cream and berries.  Yum!

Directions:
To make the cake, position a rack in the middle of the oven and preheat the oven to 350 degrees F.  Butter and flour a 9×13″ cake pan.  Whisk together the flour, baking powder, salt, and poppy seeds in a bowl; set aside.   In the clean, dry bowl of an electric mixer fitted with the whisk attachment, beat the egg whites on medium speed until foamy.  Add the cream of tartar and increase the speed to medium-high.  Beat just until stiff peaks form when the whisk is lifted.  Transfer the egg whites to a separate bowl, clean the mixer bowl and reattach it with the paddle attachment.

Add the butter to the mixer bowl and beat on medium speed until smooth.  Gradually add the sugar and beat until incorporated.  Mix in the lemon zest.  Beat the mixture on medium-high speed until light and fluffy.  Add 1/4 cup of the milk and beat until just blended.  Reduce the speed to low and add the flour mixture alternately with the remaining milk in three batches, beginning and ending with the flour, scraping down the sides of the bowl as necessary.  Beat until just blended.  Using a rubber spatula, fold one quarter of the egg whites into the batter, being careful not to deflate the mixture.  Once incorporated, add in the rest of the whites and gently fold in until well combined.

Pour the batter into the prepared pan and bake until golden and a toothpick inserted in the center comes out clean, about 24-26 minutes.  Cool the cake in the pan on a wire rack for 10 minutes.  Run a thin knife around the outside of pan and gently turn the cake out.  Allow to cool completely.

To make the raspberry curd, melt the butter in a large saucepan over medium heat.  Add the raspberries, egg yolks, sugar and salt, and cook, mashing the berries.  Stir frequently at first and then constantly at the end, until thickened, about 10 minutes.  Pour the mixture through a coarse strainer set over a bowl, pressing hard on the solids to extract as much liquid as possible.  Cool to room temperature; the curd will continue to thicken as it cools.  Stir in lemon juice to taste.  Cover and refrigerate until ready to serve.

Cut the cake into rounds as desired.  Layer the rounds with the cooled raspberry curd.  Once layered, allow the assembled cakes to cool in the refrigerator to help them set.  In the meantime, make the frosting.  In the bowl of an electric mixer fitted with the paddle attachment, beat the butter and zest on medium speed until light and fluffy.  Gradually add the sugar and beat until smooth.  Add the lemon juice and beat for one minute longer.

Frost the chilled cakes with the lemon frosting.  Garnish with fresh raspberries as desired.

Source: adapted from Notes From My Food Diary