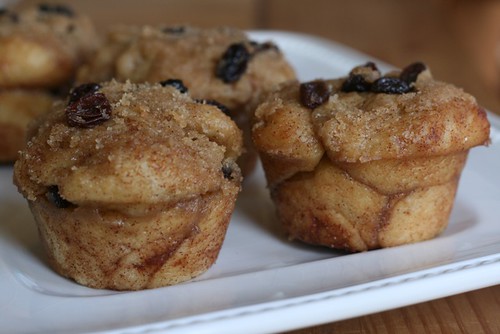 I’ve never made a yeasted muffin before, so when I saw this recipe I was definitely intrigued.  Plus, I’ve been all about things with cinnamon and sugar lately, so once I saw these I just couldn’t get them off of my mind. These were really delicious, and reminded me a lot of a cinnamon roll in muffin form.  Lots of fun to eat too, getting to pull them apart into pieces!  The basic idea is simple – making a bread dough, cutting it into chunks, tossing them with cinnamon-sugar, and then packing them into a muffin tin with raisins and a streusel-like mixture. 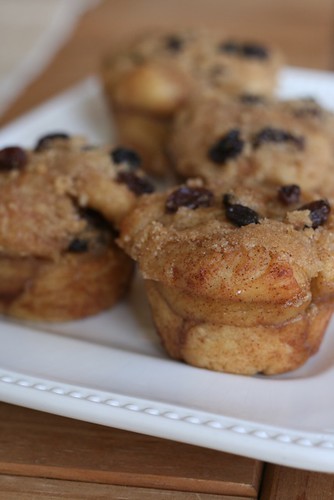 In theory, it seems easy enough, but I did encounter a few challenges along the way.  My biggest issue was with the streusel-like mixture.  The original recipe calls for the butter to be soft, so I used soft butter as instructed.  This quickly turned into a big gloppy mess.  It was impossible to crumble nicely into the muffin tins because it really was just like goo.  Once baked, the layer on top pretty much just chipped off the completely in one big piece.  Next time, I will use my common sense and past streusel experience to use cold butter and cut it into the dry ingredients, for a more crumbly consistency.  Also, the recipe is fairly vague as to how many chunks of dough you want, how big they should be, etc.  I think planning the number of dough chunks in advance is actually important, so that you have enough to fill all the muffin tins completely.  I had filled all 12 wells halfway and topped them with the goo, when I realized I was going to run out of dough chunks to finish them all.  I had to do some rearranging and ended up with 9 muffins.  I’ll definitely make these again and hopefully next time will go more smoothly now that I have worked out some of the kinks.  And you can all learn from my issues so you don’t have the rocky first try that I did!

Directions:
Combine the flour, salt and yeast in the bowl of a stand mixer fitted with the paddle attachment.  Add in the water and oil, and mix together until a dough has formed.  Switch to the dough hook and knead on low speed until you have a homogenous dough, about 3-4 minutes.  Transfer the dough to a lightly oiled bowl, turn once to coat and cover with plastic wrap.  Let rise until doubled in size, 1-2 hours.

Once the dough has doubled, turn it out onto a floured work surface.  Gently deflate the dough with the palms of your hands, form into a ball, and recover loosely with the plastic wrap.  Let sit for about 20 minutes.

While the dough is resting, make the cinnamon raisin mixture.  Combine the butter, brown sugar, granulated sugar, flour, cornstarch and cinnamon in a mixing bowl.  Toss well to combine and then cut the butter into the dry ingredients using two forks or a pastry cutter, until the mixture is crumbly.  Add in the raisins and toss to combine.

Preheat the oven to 350 degrees F.  Grease the wells of a muffin pan and dust with flour.  Once the dough has rested, flatten it to about 3/4-inch thick.  Cut into small chunks (I would suggest about 6-8 chunks per muffin, depending on the number and size of muffins you want.)  Sprinkle the chunks of dough with a little bit of flour, a handful of granulated sugar and a generous dusting of cinnamon.  Toss to combine well.

Bake for 12-15 minutes.  Let cool in the pan for 15 minutes, then run a sharp knife around the edges of each muffin, and gently scoop out of the muffin tin.

Source: adapted from Joy the Baker