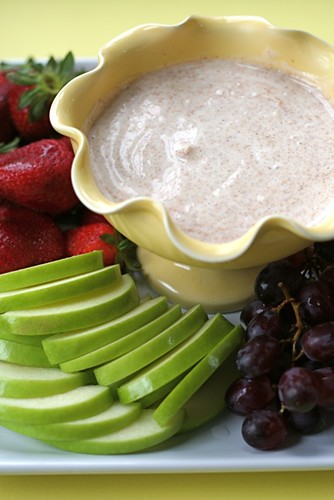 Yogurt and fruit are two of my most favorite snack foods.  I eat them every single day and never get sick of them.  I rarely combine the two though, unless it is in the form of an occasional smoothie.  Last week I decided to try this honey yogurt dip to pair with fresh fruit.  This is barely a recipe, as it is only three ingredients, but somehow I managed to mess it up.  The original recipe calls for 1/4-1/2 teaspoon of cinnamon.  I really like cinnamon so I just added 1/2 teaspoon right off the bat.  Big mistake.  The whole thing tasted so cinnamon-y, I could barely stand it.  Thankfully I was able to fix it by simply adding more yogurt and honey until the cinnamon flavor had mellowed, but let this be a warning to you – err on the side of caution.  You can always add more cinnamon but it’s not so easy to take it away!  Next time I will add just a tiny bit, because I think the honey yogurt flavor is fantastic and I really want the honey to be the star of the show.  I have never used Greek yogurt before this, but I am now a big fan of it.  It is deliciously thick and creamy.  I will make this again soon, correctly next time, for a wonderful healthy snack!  I also think it would be a welcome addition to any brunch or light lunch menu.

Directions:
Combine the yogurt and honey in a small bowl.  Mix thoroughly until smooth and well combined.  Add a very small amount of cinnamon, taste, and adjust accordingly.  Cover and refrigerate.  Serve with fresh fruit.