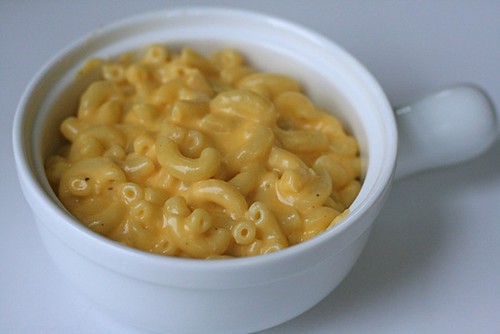 The winner of my comparison, Pioneer Woman's mac and cheese.

I’ve always been a fan of macaroni and cheese – who isn’t?  Of course, most of my life that referred to the kind from a blue box.  Because that was always my standard for mac and cheese, I never quite understood why people liked baked mac and cheese.  In my experience, it was almost always an dried out, flavorless dish at potlucks – that is NOT mac and cheese!  Eventually I learned my favorite way to make mac and cheese was the way my nanny always made it while I was growing up.  She would just cook the noodles, throw in some butter, milk and American cheese slices, season with salt and pepper and voila!  It was and is to this day, fabulous!  But in the cooking world I have noticed that most people really love baked mac and cheese, so I decided to try five different recipes from trusted sources and see if I could find one that even I would enjoy.

I diligently baked through all five recipes, and while all were good and some were definitely better than others, there was no clear stand-out winner.  None of them were that perfect mac and cheese I was hoping for.  I decided that maybe I just did not like baked mac and cheese, period.  I was pondering whether to even post my results or just scrap the whole idea when one more mac and cheese recipe popped up in my Google Reader – from Pioneer Woman.  Of course I knew I had to try it since none of her other recipes have failed me yet, but I was particularly intrigued by her recipe because she claims you can eat it simply mixed with the cheese sauce, or baked.

I’m sure you can see where all this is leading.  Pioneer Woman’s version did turn out to be my clear winner.  I made half a batch unbaked, and baked the rest in ramekins.  Though I was very excited at the prospect of the non-baked version, I would not recommend it.  It was okay, but not great.  The flavor of the dry mustard was too strong and it just had a strange texture.  I wasn’t expecting to like the baked version better, but it blew me away.  The texture was perfectly creamy, possibly due to the egg in the sauce, and the cheese flavor was perfect.  The recipe makes a huge quantity but I ended up baking all of it and we ate every last bit over the course of a week.  (I only got pictures of her unbaked version – sorry!)

Now let me say in hindsight, I wish I had used some sort of objective scoring scale to differentiate between all of these recipes (texture, cheesiness, flavor, etc.) but I did not.  I will just quickly summarize my thoughts on the others here, and then get to the good one! 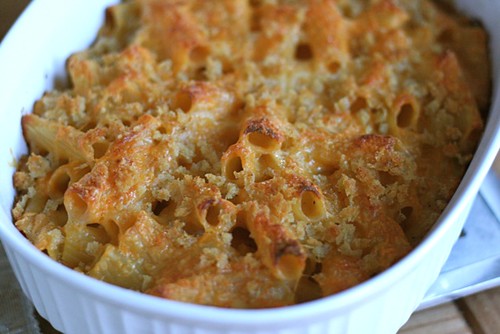 The runner up - smoked mac and cheese from Williams Sonoma.

Alton Brown – this probably ended up being my least favorite of the recipes.  It just didn’t have a very cheesy flavor.  It did taste slightly better as leftovers and I liked the Panko breadcrumbs on top, but I just wasn’t crazy about this version.

Picky Palate – I was really expecting to like this recipe because it uses some wonderful cheeses (gruyere, mascarpone, etc.) but I thought while it was incredibly creamy, the cheese flavor again was just not strong enough.  (Ben loved this one.)

Ina Garten – This was probably my second favorite of the runners up.  The cheddar and gruyere gave it a nice flavor and I liked the use of cavatappi noodles.  I did skip the tomato slices on top because I just wanted a classic version.

Southern Living (via Elizabeth’s Edible Experience) – This is the only recipe of them all that does not involve making a roux as the base of the cheese sauce.  This is made even quicker and easier by simply adding the milk, flour and seasoning to a container, shaking vigorously and then mixing it with the cheese and noodles.  I was actually surprised at how well this turned out considering how easy it is.  It was good, just not the best.

Williams Sonoma – this was my favorite of the runners up.  I think the smoked gouda imparted a great flavor and the buttery French bread crumbs on top were a great touch.  This was excellent as leftovers, and I would make it again.

Directions:
Preheat the oven to 350 degrees F.  Cook macaroni according to package directions until slightly firm.  Drain and set aside.

Add the beaten egg to a small bowl.  Take 1/4 cup of the warm sauce and slowly pour it into the beaten egg, whisking constantly to avoid scrambling the egg.  Whisk until smooth.  Pour the tempered egg mixture back into the sauce, whisking constantly.  Stir until smooth.  Mix in the cheese, reserving a handful for topping, and stir until completely melted.  Add in salt and other seasonings.  Taste and adjust seasonings accordingly.  Add the drained cooked macaroni to the pot and mix well.

Pour the mixture into a baking dish, top with reserved cheese, and bake for 20-25 minutes or until golden and bubbly on top.

Source: adapted from The Pioneer Woman