I saw Ina make these cakes ages ago while I was watching Food Network, and I knew right away that I had to try them.  Unfortunately, I did not own mini-bundt pans until recently, and though I could have baked the batter in any other sized pan, I just had my heart set on the mini-bundts.  When I received my pans for Christmas, I knew that I would have to try these soon.  Last weekend my friend Amanda hosted us for dinner (which was fabulous, by the way) and I brought these for dessert.  Even though we were all stuffed from the delicious meal, we still managed to finish our dessert as well :) 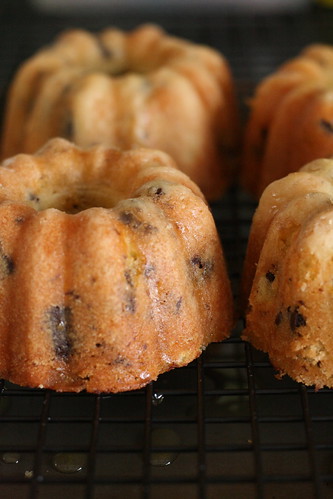 Ina’s recipe calls for semisweet chocolate but to me dark chocolate seemed a more natural pair with the orange flavor, so that is what I used.  I only made four mini-bundts because that is how many pans I have (and people I was serving), but I probably had enough batter to make five or maybe six.  I tend to overfill my mini-bundt pans because I like the cake to be at least as tall as the edge of the pans so that I can level them all to be exactly the same size.  If you like orange and chocolate together, you will love these!

In the bowl of an electric mixer fitted with the paddle attachment, cream the butter and sugar until light and fluffy, about 5 minutes.  Add the eggs one at a time, scraping down the bowl between additions.  Mix in the orange zest.

In a small mixing bowl, stir together the flour, baking powder, baking soda, and salt.   In another bowl or large liquid measuring cup, combine the orange juice, buttermilk and vanilla.  Add half of the flour mixture to the bowl of the mixer and mix on low speed until just incorporated.  Add the liquid ingredients, mixing until blended.  Add the remaining dry ingredients, mixing on low speed until just combined.  Fold in the chocolate chunks with a rubber spatula.

Divide the batter evenly between the prepared pans.  Bake for 30 minutes or until a toothpick inserted in one of the cakes comes out clean.  Allow the cakes to cool in the molds for 10 minutes.

In the meantime, prepare the syrup.  In a small saucepan over medium-low heat, cook the sugar with the orange juice just until the sugar dissolves.  Remove the cakes from the pans, place them on a wire rack over a tray, and spoon the orange syrup over the tops of the cakes.  Allow to cool completely.

To make the ganache, melt the chocolate, heavy cream and coffee in the top of a double boiler over simmering water until smooth and warm, stirring occasionally.  Drizzle over the tops of the cooled cakes.