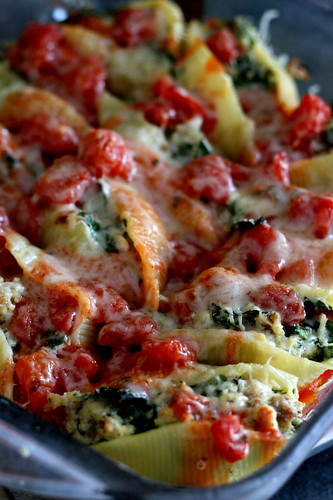 You really can’t ever go wrong with stuffed shells.  I’ve made several varieties and they have all been delicious.  These were particularly flavorful and maybe my favorite so far (but don’t make me pick, okay?)  The Italian sausage really put these over the top.  Actually though, I think my favorite thing about this recipe was the use of chopped tomatoes instead of jarred marinara sauce for topping the shells.  So often, pasta sauce can overpower whatever you put it on and your whole dish ends up tasting just like the sauce – which isn’t necessarily a bad thing, but I’d like to taste more flavors than that.  These tomatoes were just right.  They tasted great with the shells, and added a nice pop of color to the dish as well.

My main gripe with this was that the original recipe called for either 10 oz. frozen chopped spinach OR 10 oz. fresh spinach.  REALLY?  I honestly don’t know how those can be considered equivalent.  I bought a 10 oz. bag of fresh spinach, chopped up two large mounds of it, and still had at least a third of the bag left.  If I had used the whole thing, I would probably rename this recipe “Spinach, with a little bit of sausage and pasta on the side”.  I think frozen chopped spinach would be fine, but if you’re using fresh, I would definitely use less than 10 oz.  I think the amount I used was just about right.  This makes a lot of food, so be prepared to have leftovers (which are great) or freeze some.  I made three 8×8-inch trays; one for us and two for my little college bro :)

Directions:
Bring a large pot of salted water to boil.  Cook pasta shells according to package directions.  Drain, rinse with cold water, and set aside.

In a large mixing bowl, combine the egg, ricotta, spinach, 1/2 cup of the Parmesan, basil, bread crumbs, salt, and pepper.  Stir together to combine.  Add the cooked sausage mixture to the bowl and stir until evenly mixed.

Preheat the oven to 375 degrees F.  Spread a thin layer of the chopped tomatoes in the baking dishes (either three 8×8″ pans, or one 9×13″ and one 8×8″).  Stuff each shell with some of the sausage and cheese mixture, and arrange in the baking dishes, open side up.  Spread the remaining tomatoes over the top of the pasta shells.

Cover the pans with foil and bake for 30 minutes, until hot and bubbling.  Remove foil and sprinkle with remaining Parmesan cheese.  Bake, uncovered, for 10 more minutes.